Glendale, AZ (March 1, 2020) – Three kids were hospitalized on Sunday night after a two-vehicle crash involving one car catching on fire.

According to officers from the Glendale Police Department, the wreck happened in the area of Grand Avenue and Northern Avenue around 8:00 p.m. Police say a woman with three kids in her vehicle was driving northwest on Grand Avenue when a man driving southeast on Grand Avenue made a left and crashed into the woman’s car. Per officials on the scene, the woman had the right of way at the time of the crash.

The woman’s car ended up catching on fire. Though all the victims reportedly got out of the car, the three kids ended up going to the hospital. One of the children has serious injuries, while the other two sustained minor injuries.

The man driving the other vehicle also had a child as a passenger, and police say officers are investigating if the man was driving under the influence.

The investigation into this accident is ongoing. 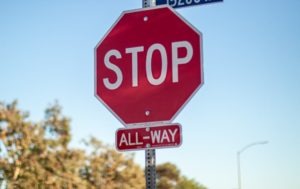 A recent accident report released by the Arizona Department of Transportation showed that there were more than 130,000 crashes across the state in 2018. Unfortunately, these wrecks resulted in numerous injuries, and at least 37,000 wrecks involved two or more victims with serious injuries. These injuries, oftentimes requiring medical attention or hospitalization, can affect victims and their families for months or even years after an accident.

In fact, victims have to cope with both physical problems and emotional trauma. Wreck victims may be required to document their injuries, negotiate with insurance companies, and take time from work, resulting in lost wages. Thankfully, victims and their families can seek help from a personal injury lawyer, especially if they’ve been involved in a wreck caused by the negligence of another driver.

Our skilled, compassionate team of injury accident lawyers at ELG Law specializes in fighting for victims and their families. Contact our accident attorneys today at (623) 321-0566 to schedule your free consultation for legal aid.

Phoenix, AZ (December 4, 2019) – A man has died after he was struck by two vehicles while crossing... read more

Phoenix, AZ (September 15, 2019) – One man was rescued after a crash threw his vehicle into the Laveen... read more

Mesa, AZ – Injuries Reported in 3-Car Crash on US 60 at Dobson Rd

Phoenix, AZ (November 23, 2019) – Officers from the Phoenix Police Department are investigating a crash that left one... read more

Mesa, AZ (October 19, 2019) – A toddler was transported to the hospital after a near-drowning in Mesa on... read more