Despite being entrusted with the day-to-day safety of our children, school buses aren’t federally required to have seat belts installed. As a parent, it’s understandable to be concerned about your child’s safety, and you might be confused as to why they don’t have a seat belt on their day-to-day transportation.

As mentioned prior, no federal law mandates seat belt installation on school buses, but for what reason? Even without seat belts, school buses are by far the safest vehicles on the road. Students are approximately 70 times safer in a school bus than in a regular car, which can be attributed to a variety of reasons:

Are Seat Belts Worth It?

The primary limitation for implementing seat belts on school buses is simple yet challenging to overcome: funding. Only six states require seat belts in school buses thus far, several of which do so only partially, such as with buses manufactured after certain dates or with allowances for school boards with insufficient funding. Despite the cost, seat belts are far from redundant, and are proven to further protect children in the event of an accident; thus, while challenging, it’s ultimately advisable for every school bus to implement two or three-point seat belt restraint systems. 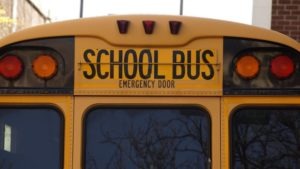 This isn’t the primary focus of most states, as students are many times more likely to be hurt while getting on or off a bus—this does happen periodically because of irresponsible drivers recklessly ignoring boarding zone laws, but it primarily occurs because a school bus driver (with limited visibility) starts to pull away while a student is rushing to catch the bus.

Although Arizona has considered making seat belts in school buses a legal requirement recently, no such legislation has passed yet. Only four to six children die on school bus children annually, but many more are injured, and for the families of these unfortunate few, it can be difficult to know who’s legally responsible for hurting your child: the bus driver, another motorist, the school board, or someone else entirely. Escamilla Law Group’s compassionate auto accident attorneys can help, so if your child has been injured in a school bus in Arizona, call us today at (623) 321-0566 to schedule a free consultation and get any advice or legal representation you might need.

5 Steps to Take After a Dog Attack

More than four million Americans sustain injuries from dog attacks each year, according to the Centers for Disease Control... read more

What Are Your Legal Options Following a Slip-and-Fall

Of the many accidents that can happen to us and leave us injured, few of them are as simple... read more

Have you been involved in an accident in Arizona? It may be helpful to know where you stand if... read more

Approximately ten percent of trucking accidents are caused by the truck itself, rather than by poor decisions made by... read more

You can never entirely prepare for a personal injury accident to occur. These accidents can happen in the blink... read more

The Importance of Wearing a Seatbelt

Wearing a seatbelt is a common-sense action that passengers and drivers alike should do every time they are in... read more

The Dangers Of Driving In The Dark In Arizona

As the days get shorter, darkness ensues for longer nights during winter months. The sun goes down at approximately... read more

How to Prove the Other Driver Was at Fault

Car accidents occur daily throughout the state of Arizona. Often it can be difficult to determine who the at-fault... read more